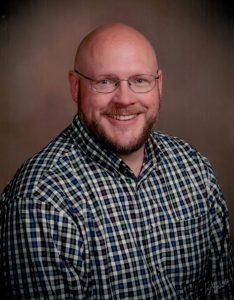 Our minister, Eric Severson, served Unitarian Universalism as a lay leader for a quarter century, locally at congregations in Mukwonago and La Crosse, WI, and in the Prairie Star District and MidAmerica Region, before embarking on the path of professional ministry.

He received a Bachelor of Science degree in agricultural journalism from the University of Wisconsin in 1986. For a time, Eric edited fantasy fiction novels. He began theological studies in 1994, and his training included student ministries in Park Forest, IL, and Petoskey, MI. Eric received his Master of Divinity degree from Meadville Lombard Theological School in 1998. Then life got in the way. He worked in marketing — for a Catholic education publisher and a local community theater — to help support his family, and he worked as a part-time office administrator at the Unitarian Universalist Fellowship of La Crosse for many years.

Two decades after his formal theological education, Eric’s self-understanding and life circumstances had changed, and he still felt called to ministry. He took the necessary steps to be credentialed by his denomination. These included completing a year-long parish internship at First Unitarian Society in Madison, WI, and a year-long chaplain residency at a La Crosse hospital. In May 2019 he was granted preliminary fellowship with the Unitarian Universalist Association and was called to serve full time at the UU Fellowship of Midland, MI, where he began in August.

Eric grew up “unchurched” by agnostic parents. He was drawn, in young adulthood, to Unitarian Universalism’s first principle, affirming every person’s inherent worth and dignity. His theology evolved over time, from humanism to panentheism to religious naturalism. His definition of “scripture” is very broad and includes traditional religious texts, poetry, music, dance, theater, history, and human experience. His spiritual practices vary and include communing with nature, choral singing, journaling, and poetry-writing.

Eric’s justice-related work has ranged from organizing anti-war vigils to representing Unitarian Universalism at a Moral Monday event at the Wisconsin capitol building, which concluded by delivering a copy of a set of moral demands to the governor’s office. He also took part in educational workshops on healing racism and witnessed the injustice of criminalizing migration and the U.S.-Mexico border.

Eric met his wife, Ellen, in the University of Wisconsin Chamber Singers and the agricultural journalism department, and they married in 1988. Their child, Jo, was born in 1990. Eric enjoys a variety of crafts and artistic endeavors.

Email Eric at minister@uufom.org, visit his ministry Facebook page here, or schedule a meeting or phone call with him here. 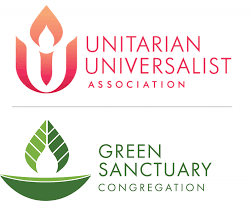 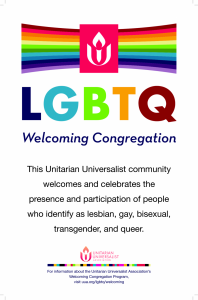